Nicola Sturgeon has been accused of ignoring the “growing scandal” of the state-owned Glasgow Prestwick Airport’s financial relationship with the US military, amid allegations it is waiving service fees for US Armed Forces aircraft at a cost to taxpayers in excess of £1m.

Patrick Harvie MSP, co-leader of the Scottish Greens, said the struggling airport, which is reliant on loans totalling £38.4m from Scottish ministers, was effectively being used as a “cut price petrol station” for the US Air Force (USAF).

Speaking at First Minister’s Questions, he said ministers have been aware for more than a year of the allegations surrounding  Prestwick, and called on Ms Sturgeon to “accept her responsibility to ensure that our public assets are not being used to support the military operations of a dangerous far right regime,” a reference to the administration of US president Donald Trump.

It comes after an investigation by The Scotsman detailed the series allegations made by multiple sources with knowledge of the loss making airport’s increasing reliance on US military business. Justice minister Humza Yousaf was alerted to the allegations last year while serving as transport minister, correspondence obtained by this newspaper shows.

The airport has repeatedly refused to respond to enquiries by The Scotsman concerning the alleged fee waivers for several hundred US aircraft making stopovers and layovers in recent years..

It comes as the House Oversight and Reform Committee in the US Congress is scrutinising US Defence Department payments both to Prestwick and nearby Trump Turnberry.

Despite the growing scrutiny on both sides of the Atlantic, it is understood a new lucrative deal which sees Prestwick provide aviation fuel for US military aircraft is expected to be ratified later this year. Under the the terms of the existing deal, the airport has received nearly £14m from the US Defence Logistics Agency, a Virginia-based combat logistics agency of the US Defence Department.

Mr Harvie told the Holyrood chamber: “This is a growing scandal, there is already a US Congress inquiry into this relationship.”

However, Ms Sturgeon referred to comments made to Holyrood earlier in the week by transport secretary, Michael Matheson, and stressed that the airport was run commercially and independently from the Scottish Government.

She said: “That’s not something that’s done for convenience. It’s essential that there is that arms-length relationship in order that we are compliant with state aid rules. 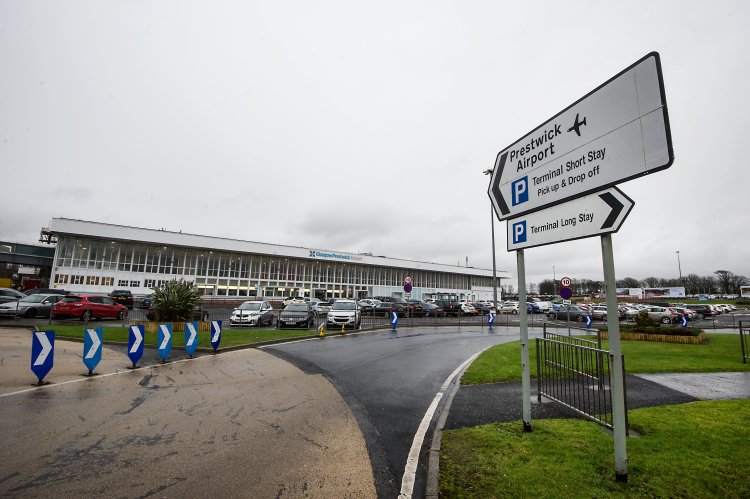 “If we were to interfere in the running of Prestwick, we would put in jeopardy the future operation of the airport.

Mr Harvie pointed to the governance structure of Prestwick’s holding company, which sees two of Ms Sturgeon’s officials sit on the board.

“That’s supposed to provide a line of democratic accountability for the issue, so that we’re not reliant on investigative journalists uncovering the facts of what’s going on,” he pointed out.

He asked Ms Sturgeon if there was “any other business plan” for Prestwick other than providing a “bargain service” for Mr Trump’s military which saw them arrange transfers for personnel to his nearby Turnberry resort..

She replied that the airport’s sources of revenue were “laid out” in its published annual accounts. However, the accounts in question only make one reference to the Defence Logistics Agency deal, and do not specify how much revenue it generates for Prestwick.

She added: “Beyond that, in terms of the future for Prestwick, as we have always said, we want to return Prestwick to the private sector as soon as we are able to do so.

“The senior management team at the airport continue to engage with potential buyers and investors, and we will continue to take the action that we require to take to ensure that the airport has a future, because I think that’s what’s important for the economy in that part of Ayrshire and the many jobs that depend on Prestwick having a future.”

Mr Harvie also called on the chamber to unite in solidarity with Kurdish people “betrayed and abandoned” by the US and now enduring a series of assault by Turkish military forces.

Ms Sturgeon said that she and the government were “deeply concerned” by and “strongly opposed” to Turkey’s unilateral military action in northern Syria.

She added she was also “extremely concerned” by Donald Trump’[s decision to withdraw support and leave Kurdish allies at Turkey’s “mercy,” explaining: “I think that is particularly reprehensible given the sacrifices Kurds have made in helping to defeat ISIS, so I hope there is a very strong response from the international community.”