‘Shettleston Man’ from The Scotsman.  Looking beyond the statistics of Glasgow’s most notorious inhabitant.

BEHIND the third barstool at the Portland Arms in Shettleston, a small brass plaque is fixed to the bar. “Davie Gerthy’s Spot,” it reads. He was, locals recall, a man who worked hard for his family. But when the work dried up, his life became measured in pints.

Davie died before his time. Like many before him, he drank himself to death. Last Monday, another regular perished by the bottle. He was 47. In this pocket of Glasgow’s East End, the alcohol death rate is now almost six times the UK average, according to figures released yesterday in the Scottish Parliament.

It is a place where statistics and percentages now act as a collective obituary. With his lowly life expectancy of 63, and a one-in-five chance of being on incapacity benefit, “Shettleston Man” – a phrase coined by former Tory leader Iain Duncan Smith – seems prone to every affliction. 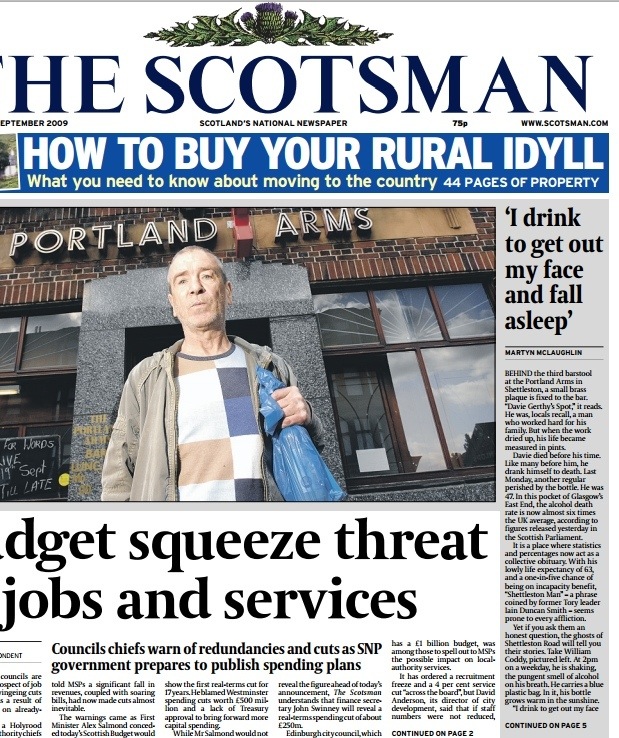 Yet if you ask them an honest question, the ghosts of Shettleston Road will tell you their stories. Take William Coddy, pictured left. At 2pm on a weekday, he is shaking, the pungent smell of alcohol on his breath. He carries a blue plastic bag. In it, his bottle grows warm in the sunshine. “I drink to get out my face and fall asleep, but I hate alcohol now. I just don’t enjoy it,” he says. “When I was a young man, I fell in love with it. Now, I’m really trying. I want to get right off it.”

Mr Coddy began drinking at the age of 16. As he made his way in the world, working on offshore rigs and at Shetland’s Sullom Voe oil terminal, the intake increased. “I just went wild, really caning it all the time,” he recalls.

Now aged 55, without work and fearful that his two sons are losing respect for him, he calls himself an alcoholic. Next Tuesday, he will attend a nearby treatment unit in an attempt to go dry. He has done so before, for as long as ten months, and even spent seven months in a rehabilitation centre. But he knows that admitting his problem is not enough to overcome it. “It’s hard, because it’s Shettleston, isn’t it?” he adds. “That’s just what we do here.”

Back inside the Portland Arms, where the cheery barmaid, Martha, attends to a steady flow of customers, John Higgins, Hugh McIntosh and Joe Murray nurse pints of Tennent’s. They have spent the morning in Parkhead, buying a racing pigeon for Mr McIntosh. Ordinarily, they will have four of five pints each by early evening, before parting ways.

“I grew up in a good household, where my parents both worked hard for their family,” Mr Higgins explains. “But at the weekend, it was as if they tried to fit five days worth of drinking into two. Every relative was giving you a drink, making sure you were topped up. That’s the environment I grew up in.”

The 58-year-old concedes he has a slight drink problem. “I don’t do it to get drunk,” he says carefully. “I drink because I don’t want to be sober. As long as there’s a can in the fridge, I can sleep easy. But I wouldn’t call five pints a day ‘drinking’.”

While candid about their relationship with alcohol and the wider social malaise that haunts Shettleston, they believe the area is at times unfairly singled out. “The same problems are in the West End of Glasgow, or places like Craigmillar in Edinburgh,” reasons Mr McIntosh, 53. “But there’s a lot of issues in Shettleston – smoking, diet, it’s not just alcohol. That’s why it’s an easy target.”

Their sincerity is a common trait in Shettleston. For a generation, the analysis of governments, local authorities, think-tanks and health officials has inured people to grim headlines. Importantly, however, they have not abandoned concern as to why their area is one of Europe’s most deprived.

Portland Arms regular Andrew Wallace, 49, bemoans the loss of jobs in the area. “In every pub you’ll find skilled tradesmen, drinking away their lives because there’s nothing else. You get up, go out, and then what?”

Those who choose to imbibe at home, he adds, make the most of cheap alcohol at the Tesco Extra store in Shettleston. “Why has a store selling discount drink been allowed to open?” he asks. In his view, the future is unlikely to bring change. “A boy from the bar died the other day, and the drink is just killing us,” he says.

But for all the numbers and league tables, certain aspects of life in this part of Glasgow remain unquantifiable. “Shettleston Man” is not a crude average deduced from grim statistics, nor is he a figure to be pitied, mocked, or quietly ignored. He is men like Davie Gerthy and William Coddy. They are being destroyed not by drink, but the absence of hope.