Is this the best justice can do? … from The Scotsman

THE true measure of a criminal justice system’s competence is not only how it redresses harm but the way it rebuilds the lives of its most vulnerable offenders. If the case of Samuel Barlow is any guide, Scotland would do well to keep the hubris surrounding its historic legal apparatus in check. A story where opacity, inconsistency and maladministration play leading roles, it began on an overcast morning last September in the Shetland harbour village of Skeld. Armed with an airgun, Barlow set off from his family croft and crossed the The Deeps bay in a dinghy.

Arriving in Scalloway, the 16-year-old traipsed six miles across moorland to Lerwick, where, over the next four hours, he trained his sights on police officers and members of the public before he was arrested without a single shot being fired. His aim was not to take lives; quite the opposite. “He was trying to get himself killed,” his father, Paul, said.

Four months earlier, Barlow had suffered a mental breakdown. His family say he was being bullied in school and online. Among those with whom the dyspractic and dyslexic teenager was in contact over the internet was a man who allegedly asked him to take part in pornographic activity; another, an individual Barlow took to be his girlfriend, allegedly implored him to commit suicide with her that morning. Both are subject to ongoing police investigations. In a psychological report prepared for court, he was described as autistic, the first time he had been diagnosed.

Photographs from the day showing Barlow brandishing the airgun augmented sensationalist press narratives. One wrongly reported gunfire. Subsequent stories mentioned Dunblane and Hungerford. Other pictures support a conflicting narrative. They show Barlow sat on a wall, the gun placed by his side. They are not snapshots of a killing spree but of a young man who once stood for the Scottish Youth Parliament and volunteered for the Red Cross now desperate, confused and looking for a lifeline.

Last week, that lifeline was denied him. At Lerwick Sheriff Court, he was given a three-year custodial sentence, reduced from four years in light of his earlier guilty plea to four charges of assault and one of abusive and threatening behaviour. Sheriff Philip Mann said Barlow’s “most serious” crimes had caused “the utmost fear and alarm.” He told him: “There is no alternative to a custodial sentence.” 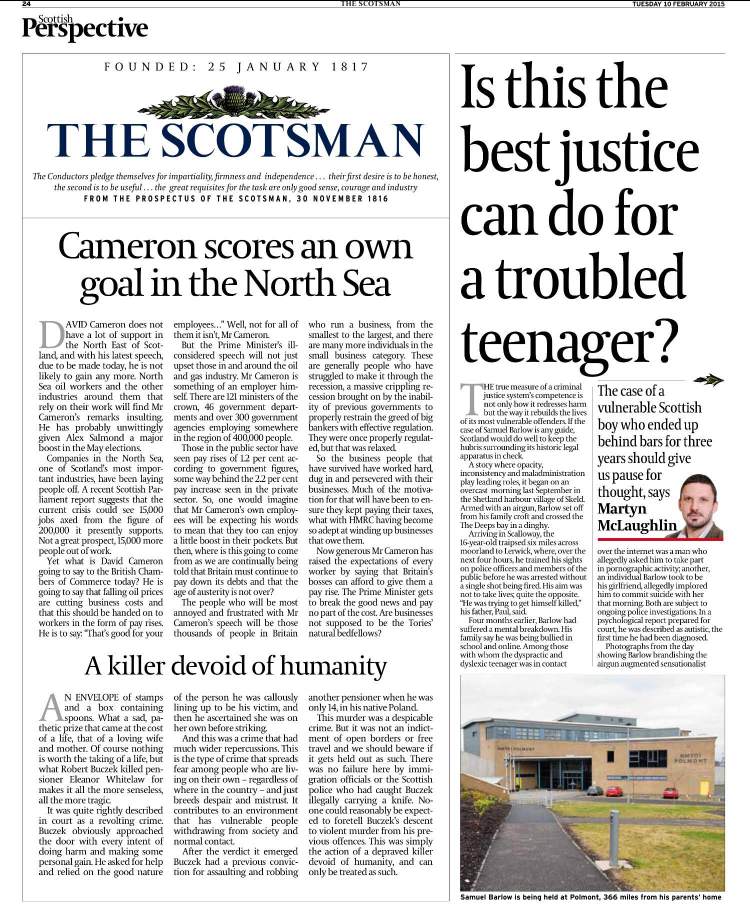 The decision is incongruous with Scottish Government community justice statistics. Last year, out of 11,203 people convicted of assault, just 1,598 were imprisoned, on average for seven months, while 225 were sent to a young offenders’ institution. The majority were fined (3,431), given Community Payback Orders (3,194) or admonished (2,210). Only 29 were sentenced to more than two years.

Why, then, did a vulnerable 16-year-old fall into this category? It is a question that has been asked via a petition calling for a rehearing. To date, it has over 1,600 signatories, demonstrative of the discontent with the sentence in Shetland and further afield. It is reasonable to ask what has become of the Scottish Sentencing Council, the oft-mooted organisation supposed to usher in uniformity of sentencing and a rehabilitative-led approach. That is one for justice secretary Michael Matheson, not Sheriff Mann.

Indeed, given we should prize our judiciary’s independence, answers should be sought from others. What guidance did Shetland Islands Council and NHS Shetland offer Mann as part of the sentencing process? Sources say the region lags behind the vast majority of local authorities in following the Whole System Approach, a government-led, early-intervention strategy launched in 2011 to find an alternative to prosecution for 16- and 17-year-olds.

According to its own internal strategy report, the health board has faced a “growing amount of dissatisfaction” over mental health provision. This includes staff retention and recruitment, a “lack of anticipation of crises” involving vulnerable people, and an insufficient psychiatric presence – it consists of one standalone psychiatrist. In an archipelago where the suicide rate for men is 40 per cent higher than the national average and the scope of charities and support groups is limited, the picture of a sentencing postcode lottery slowly emerges.

Barlow, Mann acknowledged, had faced “certain difficulties” but he said custody would protect the public and grant him “the opportunity to avail yourself of the support services that will be available to you in your place of detention”. That place is Polmont, near Falkirk, where Barlow has already spent four months after being refused bail. It will not give the young Shetlander the help he needs. 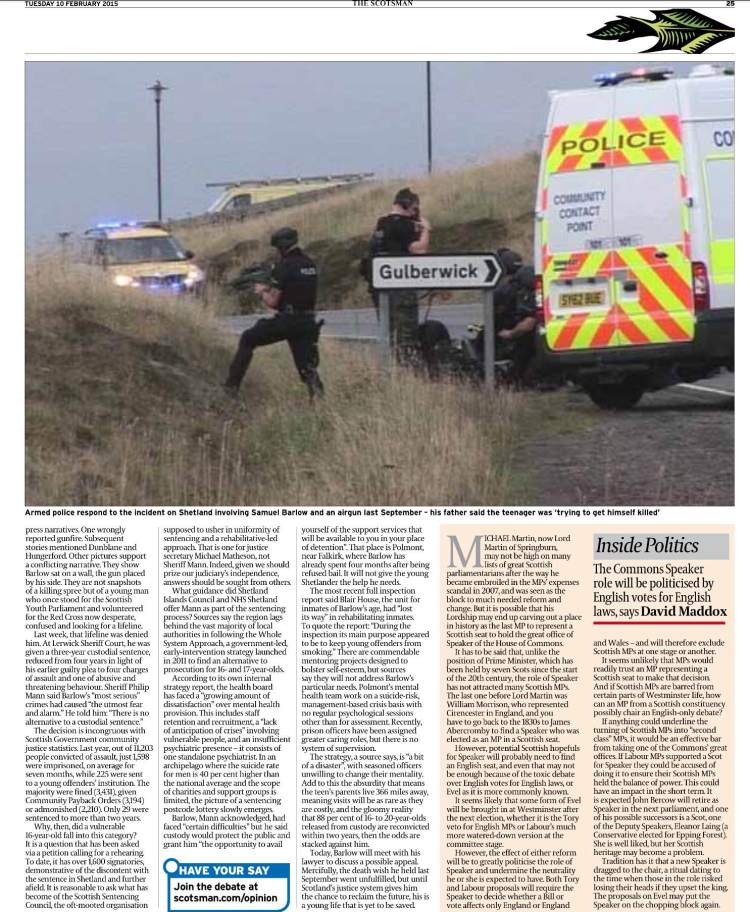 The most recent full inspection report said Blair House, the unit for inmates of Barlow’s age, had “lost its way” in rehabilitating inmates. To quote the report: “During the inspection its main purpose appeared to be to keep young offenders from smoking.” There are commendable mentoring projects designed to bolster self-esteem, but sources say they will not address Barlow’s particular needs. Polmont’s mental health team work on a suicide-risk, management-based crisis basis with no regular psychological sessions other than for assessment. Recently, prison officers have been assigned greater caring roles, but there is no system of supervision.

The strategy, a source says, is “a bit of a disaster”, with seasoned officers unwilling to change their mentality. Add to this the absurdity that means the teen’s parents live 366 miles away, meaning visits will be as rare as they are costly, and the gloomy reality that 88 per cent of 16- to 20-year-olds released from custody are reconvicted within two years, then the odds are stacked against him.

Today, Barlow will meet with his lawyer to discuss a possible appeal. Mercifully, the death wish he held last September went unfulfilled, but until Scotland’s justice system gives him the chance to reclaim the future, his is a young life that is yet to be saved.