‘Death at a Distance’ from Scotland on Sunday. The increasing use of unmanned drones by the US.

THE meeting was taking place in the village of Angoor Adda in South Waziristan, a rugged Pakistani tribal region that borders Afghanistan. Inside the small complex was Mullah Nazir, a notorious Taleban commander, and up to ten of his key lieutenants anxious to plot the way ahead for their insurgent group in 2013. To the Pakistani government and military he was something of an asset as early last year he had agreed to stop launching attacks on targets in his host country in return for being allowed to wage jihad with impunity against the allied forces – led by the British and the Americans – across the border. He had even been trying to persuade other Taleban commanders to follow the same policy.

But to those same allied forces he was still a major target – the leader of one of four Taleban groups based in Pakistan – in need of elimination. Last Wednesday evening, retribution arrived in the shape of an unmanned drone strike from the sky above, and Nazir and eight of his colleagues were fatally wounded. They were not alone. In North Waziristan, drone strikes were aimed at other Taleban targets while three al-Qaeda suspects died in a similar attack in Yemen, the fifth by a pilotless drone in the last fortnight. But it was Nazir’s high-profile slaying that has brought the drone strikes strategy back into the global spotlight, where the awkward ethical questions being thrown up by their use are gaining ground.

To allied military commanders in possession of highly sophisticated technology which can inflict damage on enemy personnel and capabilities way beyond their own borders without risking their own forces, the drones have been a huge success. But to the sovereign states over which they are operated by foreign powers, they both undermine their ability to control the military actions carried out in their name as well as having unforeseen consequences. More than 450 Pakistani civilians are believed to have been killed by drone strikes over the last nine years. As critics say, unmanned missiles cannot tell the difference between their intended targets and any innocent non-combatants who may be in the vicinity.

Concern about the US programme as a provocative symbol of power that runs roughshod over national sovereignty has now grown to such a level that the United Nations has announced it will set up a dedicated investigations unit in Geneva this year to examine the legality in cases where civilians are killed in so-called “targeted” counter-terrorism operations. It will be led by Ben Emmerson QC, a UN special rapporteur, who said some US drone strikes in Pakistan may amount to war crimes. In a speech at Harvard, he said: “If the relevant states are not willing to establish effective independent monitoring mechanisms… then it may in the last resort be necessary for the UN to act. Together with my colleague Christof Heyns, [the UN special rapporteur on extrajudicial killings], I will be launching an investigation unit within the special procedures of the [UN] Human Rights Council to inquire into individual drone attacks.”

This has set alarm bells ringing in Washington, where military commanders are preparing to step up attacks by their most effective weapon against terrorist leaderships. With both China and Russia observing the international precedent, more CIA drone attacks have been conducted under President Obama than under President George W Bush. The Obama administration has long argued that drone strikes are lawful as part of the military action authorised by Congress after the 9/11 attacks on the American mainland in 2001 as well as under the general principle of self-defence. Under those rules, “targeted killing” – as drone attacks have been labelled – are not assassination, which is banned by executive order. 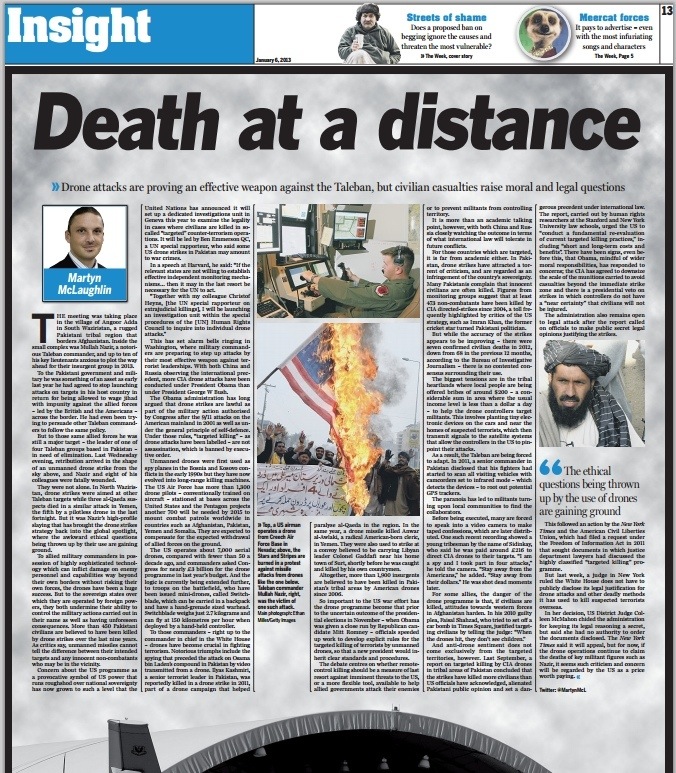 Unmanned drones were first used as spy planes in the Bosnia and Kosovo conflicts in the early 1990s but they have now evolved into long-range killing machines. The US Air Force has more than 1,300 drone pilots – conventionally trained on aircraft – stationed at bases across the United States and the Pentagon projects another 700 will be needed by 2015 to mount combat patrols worldwide in countries such as Afghanistan, Pakistan, Yemen and Somalia. They are expected to compensate for the expected withdrawal of allied forces on the ground.

The US operates about 7,000 aerial drones, compared with fewer than 50 a decade ago, and commanders asked Congress for nearly £3 billion for the drone programme in last year’s budget. And the logic is currently being extended further, to troops on the battlefield, who have been issued mini-drones, called Switch-blade, which can be carried in a backpack and have a hand-grenade sized warhead. Switchblade weighs just 2.7 kilograms and can fly at 150 kilometres per hour when deployed by a hand-held controller. To those commanders – right up to the commander in chief in the White House – drones have become crucial in fighting terrorism. Notorious triumphs include the spying that preceded the attack on Osama bin Laden’s compound in Pakistan by video transmitted from a drone. Ilyas Kashmiri, a senior terrorist leader in Pakistan, was reportedly killed in a drone strike in 2011, part of a drone campaign that helped paralyse al-Qaeda in the region. In the same year, a drone missile killed Anwar al-Awlaki, a radical American-born cleric, in Yemen. They were also used to strike at a convoy believed to be carrying Libyan leader Colonel Gaddafi near his home town of Surt, shortly before he was caught and killed by his own countrymen. Altogether, more than 1,900 insurgents are believed to have been killed in Pakistan’s tribal areas by American drones since 2006.

So important to the US war effort has the drone programme become that prior to the uncertain outcome of the presidential elections in November – when Obama was given a close run by Republican candidate Mitt Romney – officials speeded up work to develop explicit rules for the targeted killing of terrorists by unmanned drones, so that a new president would inherit clear standards and procedures. The debate centres on whether remote-control killing should be a measure of last resort against imminent threats to the US, or a more flexible tool, available to help allied governments attack their enemies or to prevent militants from controlling territory.

It is more than an academic talking point, however, with both China and Russia closely watching the outcome in terms of what international law will tolerate in future conflicts. For those countries which are targeted, it is far from academic either. In Pakistan, drone strikes have attracted a torrent of criticism, and are regarded as an infringement of the country’s sovereignty. Many Pakistanis complain that innocent civilians are often killed. Figures from monitoring groups suggest that at least 473 non-combatants have been killed by CIA directed-strikes since 2004, a toll frequently highlighted by critics of the US strategy, such as Imran Khan, the former cricket star turned Pakistani politician.

But while the accuracy of the strikes appears to be improving – there were seven confirmed civilian deaths in 2012, down from 68 in the previous 12 months, according to the Bureau of Investigative Journalism – there is no contented consensus surrounding their use. The biggest tensions are in the tribal heartlands where local people are being offered bribes of around dollars 200 – a considerable sum in area where the usual income level is less than a dollar a day – to help the drone controllers target militants. This involves planting tiny electronic devices on the cars and near the homes of suspected terrorists, which then transmit signals to the satellite systems that allow the controllers in the US to pinpoint their attacks.

As a result, the Taleban are being forced to adapt. In 2011, a senior commander in Pakistan disclosed that his fighters had started to scan all visiting vehicles with camcorders set to infrared mode – which detects the devices – to root out potential GPS trackers. The paranoia has led to militants turning upon local communities to find the collaborators. Before being executed, many are forced to speak into a video camera to make taped confessions, which are later distributed. One such recent recording showed a young tribesman by the name of Sidinkay, who said he was paid around £216 to direct CIA drones to their targets. “I am a spy and I took part in four attacks,” he told the camera. “Stay away from the Americans,” he added. “Stay away from their dollars.” He was shot dead moments later.

For some allies, the danger of the drone programme is that, if civilians are killed, attitudes towards western forces in Afghanistan harden. In his 2010 guilty plea, Faisal Shahzad, who tried to set off a car bomb in Times Square, justified targeting civilians by telling the judge: “When the drones hit, they don’t see children.” And anti-drone sentiment does not come exclusively from the targeted territories, however. Last September, a report on targeted killing by CIA drones in tribal areas of Pakistan concluded that the strikes have killed more civilians than US officials have acknowledged, alienated Pakistani public opinion and set a dangerous precedent under international law. The report, carried out by human rights researchers at the Stanford and New York University law schools, urged the US to “conduct a fundamental re-evaluation of current targeted killing practices,” including “short and long-term costs and benefits”. There have been signs, even before this, that Obama, mindful of wider moral responsibilities, has responded to concerns; the CIA has agreed to downsize the scale of the munitions carried to avoid casualties beyond the immediate strike zone and there is a presidential veto on strikes in which controllers do not have a “near certainty” that civilians will not be injured.

The administration also remains open to legal attack after the report called on officials to make public secret legal opinions justifying the strikes. This followed an action by the New York Times and the American Civil Liberties Union, which had filed a request under the Freedom of Information Act in 2011 that sought documents in which justice department lawyers had discussed the highly classified “targeted killing” programme. But last week, a judge in New York ruled the White House does not have to publicly disclose its legal justification for drone attacks and other deadly methods it has used to kill suspected terrorists overseas. In her decision, US District Judge Colleen McMahon chided the administration for keeping its legal reasoning a secret, but said she had no authority to order the documents disclosed. The New York Times said it will appeal, but for now, if the drone operations continue to claim the deaths of key militant figures such as Nazir, it seems such criticism and concern will be regarded by the US as a price worth paying.