//
The Story of Grand Theft Auto

The Perfect Crime … – The story of Grand Theft Auto

WITH their wiry frames and wan complexions, the gaggle of Scottish computer programmers and digital artists cut a conspicuous presence as they stalked the evening streets of Brooklyn’s Brighton Beach neighbourhood. Armed with digital cameras, microphones and notebooks, the 50-strong contingent perused every street and alley, soaking up the sights and sounds of the Russian-speaking immigrant community. They scoured karaoke bars and nightclubs, restaurants and shops, taking thousands of photographs and making innumerable detailed notes. In the public bathrooms by Coney Island, they encountered wily old emigrants from the Motherland in their string vests, stooped over washbasins to shave their armpits.

Throughout all five of New York’s boroughs, they continued their quest, capturing for posterity every snippet of life. They had been flown in from Edinburgh to conduct this mammoth task, but this was not their first such visit to the US; in Miami, they snapped the bikini-clad skater girls and hustlers in baby blue leisure suits, while the neon metropolis of Las Vegas proved a sensory explosion. The Big Apple, however, brought its own challenges. Though they had police protection, the group had occasion to regret ever leaving home. “One time a bunch of us were taking photos on 125th street and we were told we were going to be shot if we didn’t put the cameras away,” recalled Aaron Garbut, a University of Dundee graduate. “That was relaxing.”

Garbut, the leader of the unlikely touring party, is art director of Rockstar, the company responsible for one of the most successful and controversial computer game series in history – Grand Theft Auto. For more than a decade, the firm’s young, devoted staff have redefined the medium in which they work, helping emancipate a maligned and misunderstood pastime from its awkward adolescence, turning it into the most profitable entertainment industry ever. The most recent entry in the franchise, GTA IV, made more than £197m within a day of going on sale. Sam Houser, Rockstar’s 39-year-old co-founder and president, has appeared on the cover of Time magazine, with the august publication hailing his ability to weave “tapestries of modern times as detailed as those of Balzac or Dickens.” Yet there has been a price for this dizzying success. Houser and his charges have braved not only threats against their lives in Harlem, but a wave of moral outrage which began in Britain before thundering across the Atlantic, culminating in apoplectic denunciations of their oeuvre in the US Senate, accusations of copycat murders by enthusiasts of their products, and multi-million pound lawsuits. 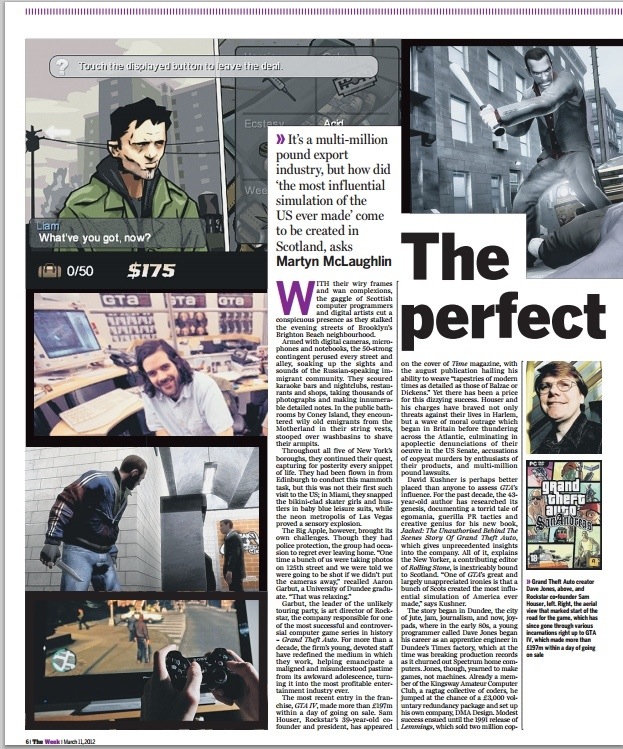 David Kushner is perhaps better placed than anyone to assess GTA’s influence. For the past decade, the 43-year-old author has researched its genesis, documenting a torrid tale of egomania, guerilla PR tactics and creative genius for his new book, Jacked: The Unauthorised Behind The Scenes Story Of Grand Theft Auto, which gives unprecedented insights into the company. All of it, explains the New Yorker, a contributing editor of Rolling Stone, is inextricably bound to Scotland. “One of GTA’s great and largely unappreciated ironies is that a bunch of Scots created the most influential simulation of America ever made,” says Kushner.

The story began in Dundee, the city of jute, jam, journalism, and now, joypads, where in the early 80s, a young programmer called Dave Jones began his career as an apprentice engineer in Dundee’s Timex factory, which at the time was breaking production records as it churned out Spectrum home computers. Jones, though, yearned to make games, not machines. Already a member of the Kingsway Amateur Computer Club, a ragtag collective of coders, he jumped at the chance of a £3,000 voluntary redundancy package and set up his own company, DMA Design. Modest success ensued until the 1991 release of Lemmings, which sold two million copies worldwide. A millionaire at 25, Jones was hailed as a genius, albeit one consumed by grander ambitions as he asked himself: “How could we make something living inside the machine?”

Around the same time in London, Houser, a brash young executive, was finding his feet at BMG Interactive, a gaming division of the German music conglomerate. He was looking for the next big thing when a DMA demo arrived. The game, initially entitled Race’n’Chase, was graphically crude, but was saturated with US pop culture references, and boasted an autonomy never seen before. “It was the defining entertainment product of its generation,” Kushner told Scotland on Sunday last week. “The acronym GTA might suggest indiscriminate to some people, but ultimately its greatest contribution was allowing people to do what they want.” An enthused Houser handed Jones a £3.4 million publishing deal, but one problem loomed large. The player controlled a police officer, and had to avoid streams of pixellated pedestrians. What if, DMA reasoned, you were rewarded with points for running them over?

So emerged the gamer as an anti-hero, capable of killing police and carjacking in a cityscape densely packed with pop culture references. BMG, mindful of criticism, sought “corporate responsibility” advice from Max Clifford, but the wily publicist urged them to embrace scandal. “We’ll encourage the right people that it would be good for them to speak out on how outrageous this is and criticise it,” he advised. His promises were not empty. Ahead of its release in autumn of 1997, Lord Campbell of Croy, the former Scottish Secretary, was condemning GTA in the House of Lords, and an impudent radio advertising campaign featured excerpts from the subsequent debate. Added to a welter of tabloid outrage, the game was a commercial triumph.

BMG was bought out by Take Two in a £9m deal, and while the programmers in Dundee retained responsibility for essential coding work, Houser and his cohorts moved to New York. At their offices on 575 Broadway, the iconoclastic geeks became renegade businessmen, conducting affairs in a frathouse bolthole boasting arcade games and foosball tables. At Houser’s bidding, Brian Baglow, a Scot who moved to NY to became Rockstar’s “lifestyle manager” took to wearing Dockers, hoodies and T-shirts boasting the slogan, “Je Suis Un Rockstar”. He later quipped: “I look more like a Long Island white boy than a dick from Dundee.” The outlaw image even made its way back to Scotland, with DMA staff given blue velvet Rockstar tracksuits. Not everyone bought in – Kushner notes that one employee gave the outfit to his mother, who wore it while walking her dog through Dundee’s streets.

Jack Thompson, a conservative attorney who attempted to bring a £156m lawsuit against its makers, while Hillary Clinton was among many politicians to condemn its wanton content. Even Jones, who departed DMA in 1999, expressed misgivings. “Some of it does make you grimace,” he said. “It is like watching Goodfellas. There are some scenes when you ask yourself, ‘Did they really have to do that? How far will this go?'”

For his part, Kushner believes the series shone a light on his homeland’s complex political and ethical standpoints. “Rockstar realised America is a different country,” he said. “For a generation of people who’d never played video games, GTA seemed like something reasonable to blame. The Hot Coffee scandal showed there was nothing more American than our aversion to sexual content while we celebrate violence.” Yet be believes the controversies surrounding GTA simply served to highlight just how supremely creative and immersive the series is. “A lot of it came down to people infantalising the medium of video games,” he added. “There was a generational divide in the media, but I think that era of controversy in games is over. We’re moving past that now.” 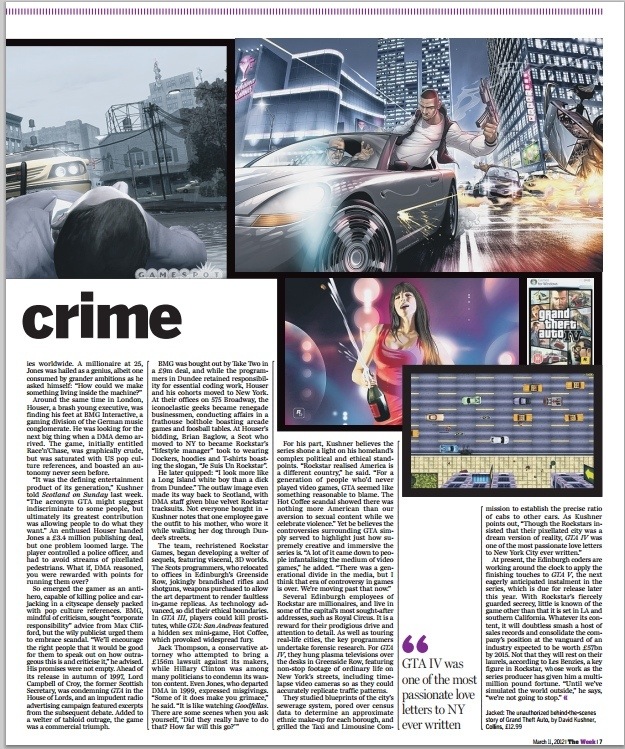 Several Edinburgh employees of Rockstar are millionaires, and live in some of the capital’s most sought-after addresses, such as Royal Circus. It is a reward for their prodigious drive and attention to detail. As well as touring real-life cities, the key programmers undertake forensic research. For GTA IV, they hung plasma televisions over the desks in Greenside Row, featuring non-stop footage of ordinary life on New York’s streets, including time-lapse video cameras so as they could accurately replicate traffic patterns.

They studied blueprints of the city’s sewerage system, pored over census data to determine an approximate ethnic make-up for each borough, and grilled the Taxi and Limousine Commission to establish the precise ratio of cabs to other cars. As Kushner points out, “Though the Rockstars insisted that their pixellated city was a dream version of reality, GTA IV was one of the most passionate love letters to New York City ever written.”

At present, the Edinburgh coders are working around the clock to apply the finishing touches to GTA V, the next eagerly anticipated instalment in the series, which is due for release later this year. With Rockstar’s fiercely guarded secrecy, little is known of the game other than that it is set in LA and southern California. Whatever its content, it will doubtless smash a host of sales records and consolidate the company’s position at the vanguard of an industry expected to be worth £57bn by 2015. Not that they will rest on their laurels, according to Les Benzies, a key figure in Rockstar, whose work as the series producer has given him a multi-million pound fortune. “Until we’ve simulated the world outside,” he says, “we’re not going to stop.”