‘My Story’, The Scotsman – The nature of the celebrity interview is intrinsically transactional, and ordinary readers now know what to expect from the formula; the star turns up to fulfil their contractual obligation to promote his or her new project and offers a few anecdotes. McGuigan, however, is far removed from that hamster wheel. Indeed, although he’s reached a new plateau of fame in recent years thanks to his work on Sherlock, he’d shirk at being called a celebrity, and it struck me he has a somewhat ambiguous relationship with Hollywood. It was hugely refreshing to hear how he places great importance of maintaining an everyday life in Scotland, and works hard at finding a balance between the personal and the professional.

PAUL McGuigan cannot remember a time when he did not want to tell stories. It just took him a few years, and a few false starts, to determine how best to turn his passion into a vocation. Decades ago, as a young Catholic growing up in the North Lanarkshire town of Bellshill, he flirted with the idea of the priesthood as a means of connection. In the end, though, he was advised against a life in the clergy from one of its own. “I was basically told by the priests that I’d find it very hard to communicate with people, which seems quite ironic given what I do,” he says. “I’m not a practising Catholic any more, but that’s not because of anything other than I’ve found different ways to understand myself.”

Fortunately, McGuigan was not put off by the priest’s advice, and throughout his career has proved himself an eager and elegant chronicler of fact and fiction. One of Scotland’s most respected film and television directors, he has worked with the haut monde of Hollywood, such as Bruce Willis, Morgan Freeman and Josh Hartnett. Spanning critically and commercially acclaimed features such as Lucky Number Slevin through to the hit BBC 1 series Sherlock, his work has resulted in an offer from Steven Spielberg to return to the US to direct more episodes of Smash, a hit drama based around a Broadway musical of the life of Marilyn Monroe. Such accolades are the fruit borne of nearly two decades in the director’s chair, during which time he has accrued a reputation for visual flair and thoughtful cinematography. Yet he can easily remember his first day of film work in the 1990s, when he was asked to adapt The Acid House, Irvine Welsh’s collection of short stories.

He says: “I remember going into the set in a taxi on the first day and thinking, ‘Okay, act like a director’. But nobody had actually told me what a director acted like, so I panicked a little. All I had was these images of crazed, jumper-wearing mental people, and I acted like that for about 20 minutes before I decided the actors wouldn’t stand for it. There was a certain amount of bravado because I hadn’t gone to film school, and I think that little bit of ignorance on my part helped because I didn’t know what was expected of me. I’ve tried to keep that innocence.” 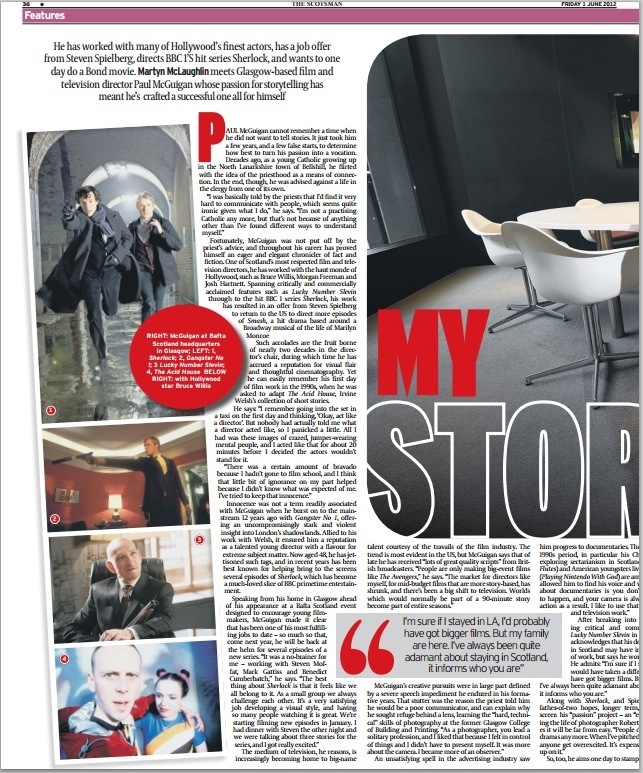 Innocence was not a term readily associated with McGuigan when he burst on to the mainstream 12 years ago with Gangster No 1, offering an uncompromisingly stark and violent insight into London’s shadowlands. Allied to his work with Welsh, it ensured him a reputation as a talented young director with a flavour for extreme subject matter. Now aged 48, he has jettisoned such tags, and in recent years has been best known for helping bring to the screens several episodes of Sherlock, which has become a much-loved slice of BBC primetime entertainment.

Speaking from his home in Glasgow ahead of his appearance at a Bafta Scotland event designed to encourage young filmmakers, McGuigan made it clear that has been one of his most fulfilling jobs to date – so much so that, come next year, he will be back at the helm for several episodes of a new series. “It was a no-brainer for me – working with Steven Moffat, Mark Gattiss and Benedict Cumberbatch,” he says. “The best thing about Sherlock is that it feels like we all belong to it. As a small group we always challenge each other. It’s a very satisfying job developing a visual style, and having so many people watching it is great. We’re starting filming new episodes in January. I had dinner with Steven the other night and we were talking about three stories for the series, and I got really excited.”

The medium of television, he reasons, is increasingly becoming home to big-name talent courtesy of the travails of the film industry. The trend is most evident in the US, but McGuigan says that of late he has received “lots of great quality scripts” from British broadcasters. “People are only making big-event films like The Avengers,” he says. “The market for directors like myself, for mid-budget films that are more story-based, has shrunk, and there’s been a big shift to television. Worlds which would normally be part of a 90-minute story become part of entire seasons.”

McGuigan’s creative pursuits were in large part defined by a severe speech impediment he endured in his formative years. That stutter was the reason the priest told him he would be a poor communicator, and can explain why he sought refuge behind a lens, learning the “hard, technical” skills of photography at the former Glasgow College of Building and Printing. “As a photographer, you lead a solitary profession, and I liked that because I felt in control of things and I didn’t have to present myself. It was more about the camera. I became more of an observer.”

An unsatisfying spell in the advertising industry saw him progress to documentaries. The products of that mid- 1990s period, in particular his Channel 4 programmes exploring sectarianism in Scotland (Football, Faith and Flutes) and American youngsters living with HIV and AIDS (Playing Nintendo With God) are among his best work, and allowed him to find his voice and vision. “The great thing about documentaries is you don’t know what’s going to happen, and your camera is always a beat behind the action as a result. I like to use that technique in my film and television work.”

After breaking into Hollywood – achieving critical and commercial success with Lucky Number Slevin in particular – McGuigan acknowledges that his decision to remain based in Scotland may have impacted on his choice of work, but says he would not change a thing. He admits: “I’m sure if I stayed in LA my career would have taken a different path. I’d probably have got bigger films. But my family are here. I’ve always been quite adamant about staying in Scotland, it informs who you are.”

Along with Sherlock, and Spielberg’s job offer, the father-of-two hopes, longer term, to bring to the big screen his “passion” project – an “epic love story” exploring the life of photographer Robert Capa, yet acknowledges it will be far from easy. “People don’t want to make big dramas any more. When I’ve pitched it, I don’t think I’ve had anyone get overexcited. It’s expensive, but you can’t give up on it.”

So too, he aims one day to stamp his mark on the James Bond franchise, having come close to directing Daniel Craig in his debut as 007. “I was down to the last two for Casino Royale,” he says. “Barbara Broccoli and Michael Wilson [the producers] had asked if I would be interested, and I’ve always been a major fan of Bond. But I think because they were bringing in a new Bond, they didn’t want another unknown factor in me. I still haven’t given up on that dream. I’ve given up on the dream of scoring the winning goal for Celtic in the European Cup final, but Bond is one thing I want to try and achieve.”

Closer to home, he is also continuing to pursue Bonnyland, an intriguing television project from the pen of Grant Morrison and starring Stephen Fry, which McGuigan describes it as a “cross between Brigadoon and Trainspotting”. He is, however, not holding out for support from Creative Scotland. Having been a vocal critic of Scottish Screen, he has yet to be convinced that its successor is making a positive impact. “It’s no longer the honeymoon for Creative Scotland, they’ve had time,” he says. “It upsets me when I get e-mails saying, ‘Come along to an audience with Creative Scotland.’ Is this an audience with Ken Dodd? It can’t be about the people running the industry, it should be about the people making the films.”