//
Calls for inquiry into finances of Trump’s Scottish firms

A US political ethics watchdog has demanded the Department of Justice investigate the books of Donald Trump’s Scottish golfing resorts after flagging up “suspect” financial disclosures.

The American Democracy Legal Fund (ADLF) has highlighted “significant and widespread discrepancies” in the reported income of the Republican presidential candidate’s resorts at  Trump Turnberry in South Ayrshire and Trump International Golf Links in Aberdeenshire.

The organisation has now written to Raymond Hulser, chief of the public integrity section at the Department of Justice, as well as Walter Shaub, director of the US Office of Government Ethics, calling for an inquiry.

As reported by The Scotsman in January, there is a gulf between the figures reported by Trump to the Federal Election Commission (FEC) – an independent regulatory agency which oversees the financing of elections – and those reported to Companies House in the UK.

The Washington DC-based ADLF claims Trump has broken the Ethics in Government Act, a federal law introduced in the wake of the Watergate scandal. Under the legislation, presidential candidates are required to disclose their financial holdings and transactions. 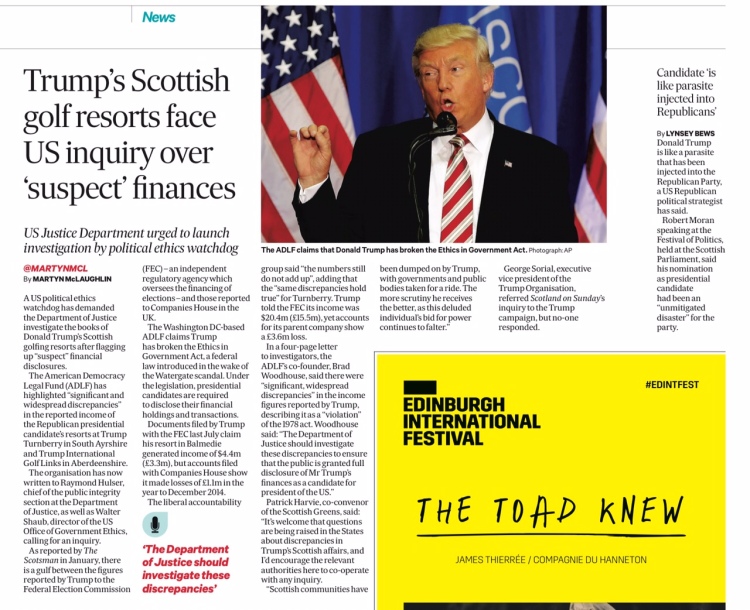 Documents filed by Trump with the FEC last July claim his resort in Balmedie generated income of $4.4m (£3.3m), but accounts filed with Companies House show it made losses of £1.1m in the year to December 2014.

The liberal accountability group said “the numbers still do not add up”, adding that the “same discrepancies hold true” for Turnberry. Trump told the FEC its income was $20.4m (£15.5m), yet accounts for its parent company show a £3.6m loss.

In a four-page letter to investigators, the ADLF’s co-founder, Brad Woodhouse, said there were “significant, widespread discrepancies” in the income figures reported by Trump, describing it as a “violation” of the 1978 act. Woodhouse said: “The Department of Justice should investigate these discrepancies to ensure that the public is granted full disclosure of Mr Trump’s finances as a candidate for president of the US.”

Patrick Harvie, co-convenor of the Scottish Greens, said: “It’s welcome that questions are being raised in the States about discrepancies in Trump’s Scottish affairs, and I’d encourage the relevant authorities here to co-operate with any inquiry.

“Scottish communities have been dumped on by Trump, with governments and public bodies taken for a ride. The more scrutiny he receives the better, as this deluded individual’s bid for power continues to falter.”