‘Whole Lotta Memories’, Scotland on Sunday – AC/DC are a curious beast as far as the media is concerned. They are one of the best selling bands in history, capable of selling out aircraft hangar sized venues from Aberdeen to Adelaide. Yet for years, they were deemed a derisory sideshow, tagged as a heavy metal anachronism according to the lumpen analysis of broadsheet popular musical critics. I can see why their constancy and subtle reworking of Chuck Berry’s oeuvre might jar with some, but it is those qualities that make me an unashamedly obsessed fan. As such, I thought I’d try for an interview around the time of the band’s mammoth Black Ice tour. I was astonished when word came back that Brian Johnson, the lead singer, would be only too happy to chat. It took considerable discipline to muffle my squeaking 14-year-old inner child – and find fitting adjectives to describe Jonno’s voice – but in the end, it was great to come away with a pen portrait of an ordinary Geordie’s unlikely ascent to rock stardom … I’m still hopeful of getting Angus and Malcolm.

AT THE age of 32, Brian Johnson thought he would rock no more. He’d enjoyed modest success with the band Geordie, but their fortunes were on the wane. “I went off the radar,” he recalls. “I thought I’d had me shot. Dinna be greedy, Jonno, ya know?” Already responsible for a 12-year-old daughter, Joanne, he moved back under his parents’ roof in the Gateshead village of Dunston, and set about building up his own business, North East Vinyls, fitting windscreens and repairing car roofs. Above his home telephone number, North Shields 78105, his business cards featured a caricature of what might have been, had Geordie broken the US – the stocky figure of the company founder, thick black curls poking out from under his flat cap, poised at the wheel of a Cadillac.

Events nearly 9,000 miles away ensured such fanciful daydreams would soon become reality. In the western Australia port city of Fremantle, Chick and Isa Scott were saying goodbye to their loveable vagabond son, Ronald ‘Bon’ Scott. The singer with AC/DC had died at the age of 33, his body no longer able to cope with its owner’s insatiable appetite for bacchanalia. His distraught bandmates considered splitting up, but Isa convinced them otherwise. “Go out and find a new singer,” she told them. “Bon would have wanted it that way.”

So it came to pass that one afternoon in February 1980, North Shields 78105 rang out, but the caller was not enquiring about a cracked pane in the passenger window. Johnson was in two minds about auditioning for another band. “I didn’t think I’d be bit again,” he said. “In the end, I only went cos I had other work lined up in London, a Hoover advert jingle! That ad got me £350, the most money I’d had in one go in me life!” He stops, before breaking into song: “It’s the new Hoover, ooh! She such-a-sweet little movurgh, ooh, yeargh!”

Nearly three decades on, Johnson’s audience has expanded well beyond house-proud gadget lovers. Currently midway through a two-year world tour to promote Black Ice, AC/DC’s 16th studio album, his place is assured in the annals of rock history. “If I was in me thirties looking at myself now, the first thing I’d have thought is, ‘What an old fart!’, ya know?” he says with a gurgling laugh from his Dallas hotel room. “Quick, evacuation! What the f***? Old fart on stage! Remove him immediately!”

Yet Johnson has acquired that ageless quality common to the international rock star. The AC/DC entity itself is Peter Pan with an Asbo, a band that has seldom strayed from the musical formula devised in 1973 by two Scottish émigrés, Angus and Malcolm Young. Growing up in Australia with a sparse musical diet of blues and rock, they concocted a horse-drawn rhythm section of blood-throbbing bass and blunderbuss drumbeats, layered with choppy, zig-zagging riffs, the like of which first rang out a half century ago in the downtrodden Chicago recording studio of Chess Records.

As they rose to prominence, critics assumed a disdainful acceptance, first labelling the band exponents of punk, and later heavy metal. Yet their songs have always been so cheeringly frivolous as to defy both categories. AC/DC simply play prelapsarian rock’n’roll boogie, each lick just different enough to distinguish it from the one before. As Johnson puts it: “Someone said to Angus the other day, ‘Hey, you’ve made the same album 15 times.’ Angus said, ‘No, man, we’ve made the same album 16 times!'” 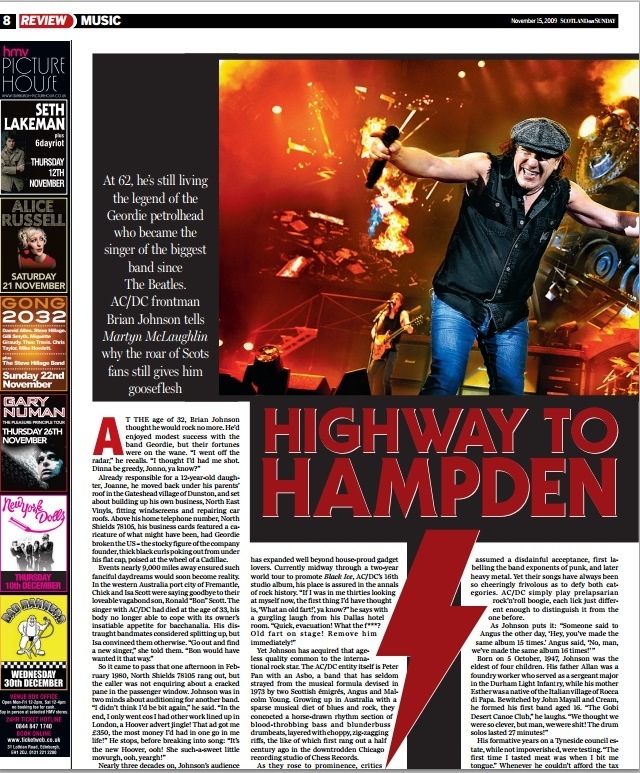 Born on 5 October, 1947, Johnson was the eldest of four children. His father Allan was a foundry worker who served as a sergeant major in the Durham Light Infantry, while his mother Esther was a native of the Italian village of Rocca di Papa. Bewitched by John Mayall and Cream, he formed his first band aged 16. “The Gobi Desert Canoe Club,” he laughs. “We thought we were so clever, but man, we were shit! The drum solos lasted 27 minutes!” His formative years on a Tyneside council estate, while not impoverished, were testing. “The first time I tasted meat was when I bit me tongue.” Whenever he couldn’t afford the tax disc for an Austin Maxi that resembled a “matchbox with an erection”, he would fashion a replacement from the label of a Newcastle Brown Ale bottle.

Today, Johnson is wealthy beyond his dreams. AC/DC have sold more than 200 million albums worldwide, a haul bettered only by The Beatles. With their latest LP debuting at No1 in 29 countries, the five-piece has made £58 million in the past 12 months alone. Resident in Sarasota, Florida, he nonetheless places great weight on privacy and humility, returning to the north-east of England at least four times a year to visit family or catch up with friends for a pint. “You’ve gorra keep the f***ers away, me son,” he tells me. “You have to stay grounded.”

Johnson’s diversions during the recording of Black Ice saw him write his memoirs, Rockers And Rollers. Focusing mainly on his passion for cars, it boasts a collection of bawdy, Spinal Tap yarns. One chapter, for instance, details an episode on the AC/DC tour bus when he tried to boil a haggis purchased in Edinburgh using an electric kettle. The results, unsurprisingly, ended up splattered on the walls. His choice of dinner that evening points to a love of all things Scottish. “I love driving about up there. I used to go up a lot to Loch Lomond and Loch Ness, but you know my favourite place now? Melrose in the Borders. Driving around there is fabulous. I tell ya, it’s beautiful, me son.”

Scotland, too, has been the scene of many a seminal gig, from the beer-soaked nooks of Glasgow’s Apollo to the city’s Hampden stadium earlier this summer. “I f***in’ love Hampden,” Johnson explains. “This band is a bullshit-free zone, but that Hampden roar, that’s not a myth. I swear to God, the hairs on the back of my arms stood up, and me old ticker was twitching like a rabbit’s nose. Every now and again, you get that… that f***ing thing.” 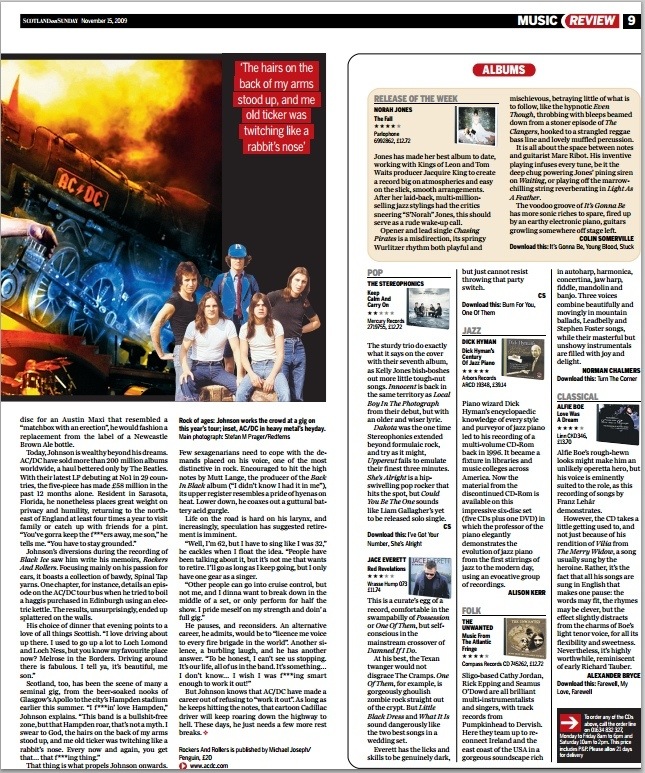 That thing is what propels Johnson onwards. Few sexagenarians need to cope with the demands placed on his voice, one of the most distinctive in rock. Encouraged to hit the high notes by Mutt Lange, the producer of the Back In Black album (“I didn’t know I had it in me”), its upper register resembles a pride of hyenas on heat. Lower down, he coaxes out a guttural battery acid gurgle.

Life on the road is hard on his larynx, and increasingly, speculation has suggested retirement is imminent. “Well, I’m 62, but I have to sing like I was 32,” he cackles when I float the idea. “People have been talking about it, but it’s not me that wants to retire. I’ll go as long as I keep going, but I only have one gear as a singer. Other people can go into cruise control, but not me, and I dinna want to break down in the middle of a set, or only perform for half the show. I pride meself on my strength and doin’ a full gig.”

He pauses, and reconsiders. An alternative career, he admits, would be to “licence me voice to every fire brigade in the world”. Another silence, a burbling laugh, and he has another answer. “To be honest, I can’t see us stopping. It’s our life, all of us in the band. It’s something… I don’t know… I wish I was f***ing smart enough to work it out!” But Johnson knows that AC/DC have made a career out of refusing to “work it out”. As long as he keeps hitting the notes, that cartoon Cadillac driver will keep roaring down the highway to hell. These days, he just needs a few more rest breaks.