Cherub Chancellor … from The Scotsman. A sketch on George Osborne’s inaugural budget as chancellor.

HE ENTERED political life as pale and fragile as a White Rose of York, but after just seven weeks mired in the manure of the deficit, Chancellor George Osborne yesterday revealed his thorns. It is said the young can be the most cruel, but at the outset of his maiden Budget, George claimed innocence for the savagery that lay ahead, having taken the helm of an economy in “ruins”.

Here was a boy tasked with paying for the past and planning for the future, a cherub forced to lay down his bow and pick up an axe. In fairness, no-one could envy the scale of the challenge facing the youngest chancellor since Randolph Churchill in 1886. Until yesterday, George’s most testing job came after his graduation from Magdalen College, when he spent a week working in Selfridges, picking up the towels that customers had examined but not bought, before folding them and placing them back on the shelf. He entered the Treasury to find the towels not so much ruffled, as torn into pieces, covered in petrol, and set alight.

Having inherited an empire in ruins, the Bullingdon Baronet sought to convince butchers and bakers that things will not be fluffy. “We’re all in this together,” came one early taste of Osbornese. He pledged not to hide from the electorate the full horrors of his Budget, and to his credit, George was uncompromising in his candour. The speed with which he outlined £11bn worth of cuts to the welfare system prompted the Labour back-benches to emit a noise that could have been more shrill if enlivened by a chorus of vuvuzelas. 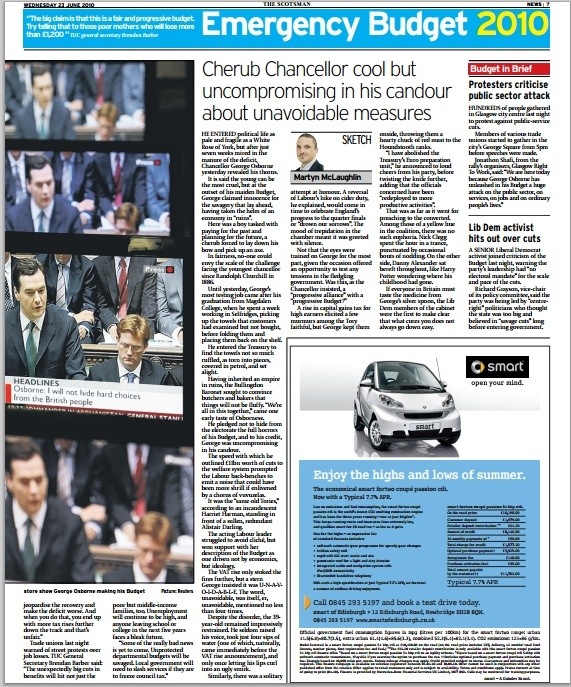 It was the “same old Tories,” according to an incandescent Harriet Harman, standing in front of a sullen, redundant Alistair Darling. The acting Labour leader struggled to avoid cliché, but won support with her description of the Budget as one driven not by economics, but ideology. The VAT rise only stoked the fires further, but a stern George insisted it was U-N-A-V-O-I-D-A-B-L-E. The word, unavoidable, was itself, er, unavoidable, mentioned no less than four times.

Despite the disorder, the 39-year-old remained impressively restrained. He seldom raised his voice, took just four sips of water (one of which, naturally, came immediately before the VAT rise announcement), and only once letting his lips curl into an ugly smirk. Similarly, there was a solitary attempt at humour. A reversal of Labour’s hike on cider duty, he explained, would come in time to celebrate England’s progress to the quarter finals or “drown our sorrows”. The mood of trepidation in the chamber meant it was greeted with silence.

Not that the eyes were trained on George for the most part, given the occasion offered an opportunity to test any tensions in the fledgling government. Was this, as the Chancellor insisted, a “progressive alliance” with a “progressive Budget?” A rise in capital gains tax for high earners elicited a few murmurs among the Tory faithful, but George kept them onside, throwing them a hearty chuck of red meat to the Houndstooth ranks.

“I have abolished the Treasury’s Euro preparation unit,” he announced to loud cheers from his party, before twisting the knife further, adding that the officials concerned have been “redeployed to more productive activities”. That was as far as it went for preaching to the converted. Among those of a yellow hue in the coalition, there was no such euphoria.

Nick Clegg spent the hour in a trance, punctuated by occasional bouts of nodding. On the other side, Danny Alexander sat bereft throughout, like Harry Potter wondering where his childhood had gone. If everyone in Britain must taste the medicine from George’s silver spoon, the Lib Dem members of the cabinet were the first to make clear that what cures you does not always go down easy.