Donald Trump’s trip to the UK and Ireland has cost US taxpayers more than £2.7m to date, with more than £1m going towards rooms at five-star London hotels tied to the ruling family of the oil and gas-rich Gulf state of Qatar.

An analysis by The Scotsman of dozens of purchase and delivery orders placed by the US government in recent weeks shows that some of the most exclusive accommodation in London has been snapped up for the vast entourage accompanying the US president on his three-day state visit.

However, that does not include the policing and security bill for Mr Trump’s controversial visit, which is expected to cost British taxpayers an eight-figure sum.

The extensive list of payments shows a funeral directors on the east coast of Ireland is among those companies in line for a sizeable payday, with authorities in the US committing nearly £740,000 towards chauffeur services and luxury car rentals from the firm ahead of the Irish leg of Mr Trump’s visit.

But the data shows it is some of London’s most salubrious hotels – and their wealthy middle Eastern owners – that are in line for the biggest payments, with the spending records revealing as much about the fragmented international ownership of prime real estate in the capital as they do the enormous scale of the visiting US party. The US State Department has placed a delivery order worth $1,223,230 (£967,379) for rooms at the Intercontinental Hotel Park Lane. The order, lodged on 20 May, specifies the payment is for “hotel rooms for VIP visit.”

All the payments were made to Constellation Hotel (Opco) UK SA, the operating company which runs the luxury five-star hotel in Mayfair.

Three other members of the powerful Al Thani family dynasty were directors of the firm, but stepped down last December, filings show.

The State Department also paid $47,311 (£37,415) on 25 May to Churchill Group Limited for accommodation at the Hyatt Regency London. The purchase order specifies that the money is for “hotel rooms in support of a VIP visit.”

The payments are likely to be of interest to observers of the Trump administration’s relationship with Qatar, which has been defined by tension followed by a period of rapprochement.

In June 2017, Mr Trump has claimed credit for the pressure being placed on Qatar by its Gulf neighbours, who accuse it of supporting terrorism in the region.

Last April, however, he welcomed Sheikh Tamim bin Hamad Al Thani, the Qatari emir, to the White House. Mr Trump praised him for becoming a “big advocate” of combating terrorist financing, adding that he was a “great gentleman” and a “friend.”

Other procurement records – detailed in an official US government database of federal spending – show two payments worth a total of $242,212 (£191.550) were made between 1 and 20 May to GH Hotel Operating Company Limited to host VIPs at Grosvenor House Hotel in Park Lane. It is part of the Marriott hotel group.

A total of $128,662 (£101,751) paid to Cumberland Hotel (London) Limited for rooms at the newly rebranded Hard Rock Hotel London on Great Cumberland Place.

Again, the purchase order payments, made between 21 and 28 May, are for “hotel rooms to support a VIP visit.”

The hotel is ultimately owned by the Hong Leong company, a private corporation based in Malaysia.

An additional three payments worth a total of $364,115 (£287,956) were made by the State Department to unspecified “miscellaneous foreign awardees” in the UK between 22 and 29 May. All were for hotel rooms in connection with the “VIP visit.”

It is not known what members of the presidential entourage will be staying at the booked hotels, which are closely clustered around the east side of Hyde Park.

Mr Trump and his wife, Melania, are reported to be staying at Winfield House, a mansion in Regent’s Park which serves as the official residence of Woody Johnson, the US ambassador to the UK.

Despite reports that the president’s adult children and their partners are staying at the Corinthia Hotel, there is no record of payments to the firm. 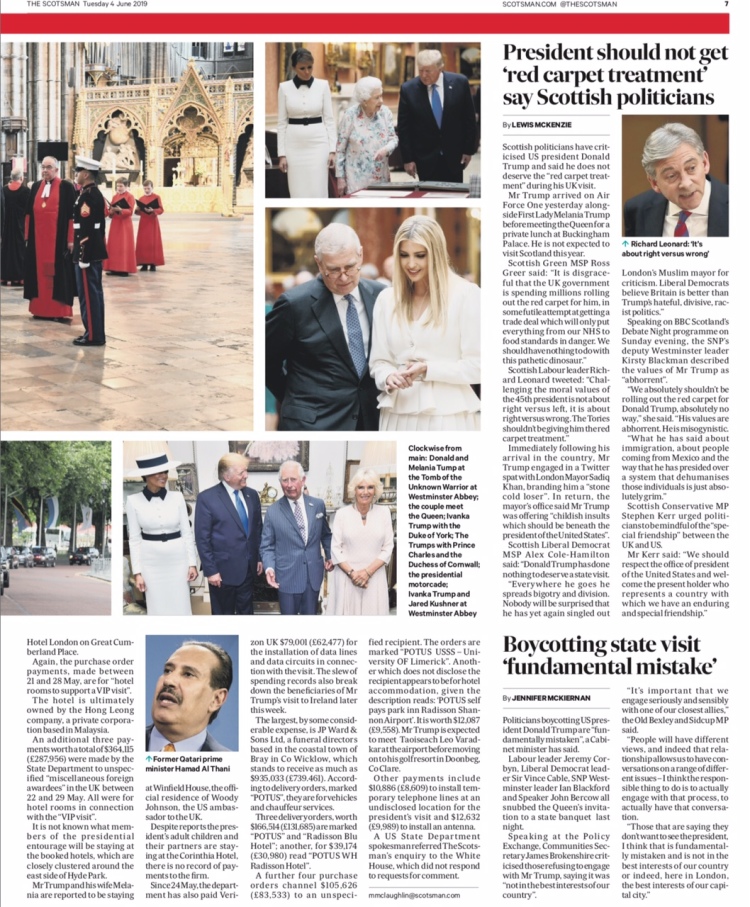 Since 24 May, the department has also paid Verizon UK $79,001 (£62,477) for the installation of data lines and data circuits in connection with the visit. The purchase order does not make clear where they are being installed.

The slew of spending records also break down the beneficiaries of Mr Trump’s visit to Ireland later this week.

The largest, by some considerable expense, is JP Ward & Sons Limited, a funeral directors based in the coastal town of Bray in Co Wicklow, which stands to receive as much as $935,033 (£739.461).

According to the delivery orders, which are marked, ‘POTUS’, all the payments are for vehicles and chauffeur services.

A further four purchase orders channel $105,626 (£83,533) to an unspecified recipient. The orders are marked ‘POTUS USSS – University OF Limerick’. Another which does not disclose the recipient appears to be for hotel accommodation, given the description reads: ‘POTUS self pays park inn Radisson Shannon Airport’. It is worth $12,087 (£9,558).

Mr Trump is expected to meet with Taoiseach Leo Varadkar at the airport, before moving on to his golf resort in Doonbeg, Co Clare.

All the Irish payments have gone through the US embassy in Dublin, with those earmarked for London hotels made via the London embassy.

A US State Department spokesman referred The Scotsman’s enquiry to the White House, which did not respond to requests for comment.