Trump’s firm invited to ‘pitch’ for new airline at ailing Prestwick from The Scotsman – An investigation into how representatives from Trump Turnberry, owned by US president Donald Trump, were asked to pitch for new business at the state-owned Prestwick Airport.

Representatives from the golf course and hotel resort, which remains under the US president’s ultimate ownership, were asked to travel with airport and local authority staff to Denmark to “pitch” to the airline earlier this year. The Scottish Government was made aware of the collaboration.

The disclosure has sparked renewed criticism of the government over the hypocrisy surrounding Prestwick’s business relationship with Mr Trump.

First Minister Nicola Sturgeon has been an avowed critic of the 71-year-old and his politics, stripping him of his Global Scot ambassador status after his contentious remarks about Muslims. As recently as August, she described the prospect of his coming to Britain on an official state as “unthinkable.”

In the meantime, officials at Prestwick, wholly owned by Scottish ministers, have sought out the help of Mr Trump’s most prestigious golf resort.

Patrick Harvie, co-convener of the Scottish Greens, said the billionaire’s “toxic brand” was doing “real damage” to Scotland’s reputation and said the revelation proved the current set-up, which sees Prestwick operate at arms-length from the government, was not working.

It comes amid reports ministers are preparing to sell the beleaguered airport, which is running at an operating loss of £8.7m a year, with the amount of taxpayers’ money shoring up the hub increasing by £9.6m last year to £30.9m.

Attracting new airlines is seen as a crucial step to securing a sustainable future for Prestwick and ultimately, enticing a buyer from the private sector. The airport currently counts Ryanair as its sole scheduled services operator.

Representatives from Prestwick met in April with a prospective new airline at Routes Europe, an aviation industry event held in Belfast. The company, whose identity has not been disclosed, informed Prestwick it had a spare aircraft that could be put to use in a new route.

Referring to the airline as X, an extract from the meeting – passed to The Scotsman by a source familiar with Prestwick’s operations – details how the airport arranged a visit “where each stakeholder will pitch to X to support this new route. We believe this will give X the confidence required to launch direct services.”

The meeting with the airline took place in Copenhagen in July. However, Trump Turnberry said it did not attend the formal pitch, and received no payment for its work. The only new route secured by Prestwick in the past year has been Ryanair’s reinstated service to the Polish city of Rzeszow.

The source said: “There has been tentative interest in new routes at Prestwick in recent years but it has been an uphill battle to compete. There were talks with Flybe but the business case was not strong enough.”

Mr Harvie said: “Given Mr Trump’s appalling behaviour, he was rightly stripped of his Global Scot ambassador status and Scottish ministers have been at pains to distance themselves from a bigoted bully they previously cosied up to. It’s disappointing that his business is influencing a government-owned asset.

“It suggests operating at arms-length isn’t enough and I would hope Prestwick realises that Trump’s toxic brand does real damage to Scotland’s reputation.”

Since it was taken over by the government for £1 in November 2013, Prestwick’s executives have struggled to formulate a strategy to get out of the red. Its passenger total in the 12 months to September was 671,860, a fraction of its 2007/8 peak of 2.78 million. Its senior executive team has also been subject to major upheaval. Ron Smith, the chief executive officer, left last month after 15 months in charge. Mike Stewart, its business development officer, quit soon afterwards.

In the airport’s most recent annual accounts, Mr Smith wrote that a range of bodies, including Transport Scotland, VisitScotland, and local authorities, had been involved in developing “an attractive route development package.” There is, however, no mention of Trump Turnberry, the Trump Organisation or its Scottish subsidiaries.

It is not the first time Mr Trump and his companies have been expressed a keen interest in Prestwick’s passenger services since he bought Turnberry in April 2014. Seven months after the acquisition, which has yet to turn a profit for Mr Trump, he spoke out after Ryanair transferred several routes to Glasgow Airport.

He said he had a “long telephone conversation” with Michael O’Leary, its chief executive, which left him convinced the firm would play a major role in Prestwick’s future. “He needs incentives – as anyone does,” Mr Trump told The Scotsman at the time. “It’s down to the politicians to make that deal now.” 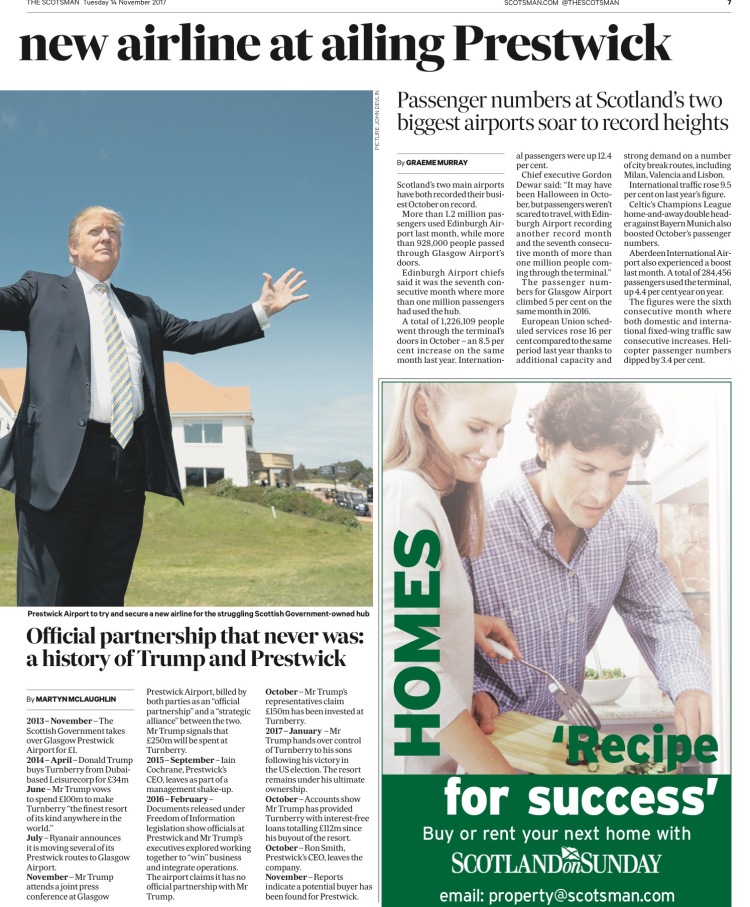 That same month, the airport and the Trump Organisation issued a joint press release announcing they had formed an “official partnership” and “strategic alliance.” The nature of the relationship was unclear until correspondence released under Freedom of Information legislation to Scotland on Sunday showed airport officials had held unminuted discussions over “potential partnership opportunities” and disclosed business development targets with Trump Turnberry.

Following the release of the documents, Prestwick contradicted the information in the press release, stressing it had no “official partnership contract in place” with Mr Trump. It added that at no time had it asked Mr Trump “to act as an advocate for the airport.”

Last night, Trump Turnberry explained it “works closely” with stakeholders such as Prestwick to bolster tourism in Ayrshire. A spokeswoman added: “For a recent pitch, Turnberry provided information on the golfing and accommodation opportunities available within the resort to the Prestwick team, to help position Ayrshire as an attractive golfing destination.”

A spokesman for the airport said: “We work closely with various organisations to share knowledge and experience to promote and grow tourism in Ayrshire. “Glasgow Prestwick Airport is an important asset for Scotland. We are focused on identifying new opportunities to bring new business to the airport and local economy in line with our strategic plan.”

A spokesman for the Scottish Government said: “In compliance with European Union state aid rules, Prestwick is being operated on a commercial basis and at arm’s length from the government. “The senior management team at the airport has been tasked with all aspects of taking the airport forward, including building on existing revenue streams.”