IF THE vogue for molecular gastronomy seems anathema to the sensibilities of most Glaswegians, Porter & Rye offers a compelling argument that small-plate dining is at home in the post-industrial city. The restaurant, run by Kained Holdings, the firm behind The Finnieston and The Crafty Pig, performs tricks aplenty on its plates, with steam, foam, gel and dust all playing strong support roles. The protagonist, however, is the steak – a surefire way to convince any sceptics.

Since opening in December, the Argyle Street eatery has built up a buzz. Even on a drookit weeknight, a steady stream of diners escape the drizzle in a room bathed in soft light and a bouncy Americana soundtrack. The premises are intimate and enjoy a sharp, fluid design, with exposed brickwork and steel rising in symmetry with glass and ornate tiling.

The dining space is limited but well laid out via a mixture of booths and tables on a split mezzanine. Most offer good views of a bustling cocktail bar, the open kitchen and the real centrepieces – two grand, ageing fridges for the beef. It is, you see, the beef, sourced from the Brown family’s Gaindykehead Farm near Airdrie, that brings them in. Though to call Porter & Rye a steakhouse wouldn’t do it justice.

At first glance, the lively menu seems a little flighty and mercurial, combining beef-only mains with a gamut of small plates and sides in the molecular tradition. In practice, it all works, with the dishes designed to complement the steaks. Our starters, smoked Ayrshire ham hock rillette and scallops hand-dived by Guy Grieve, made for an appealing introduction to the aesthetic. The plating was inventive and elegant and showed a lightness of touch without being gimmicky. 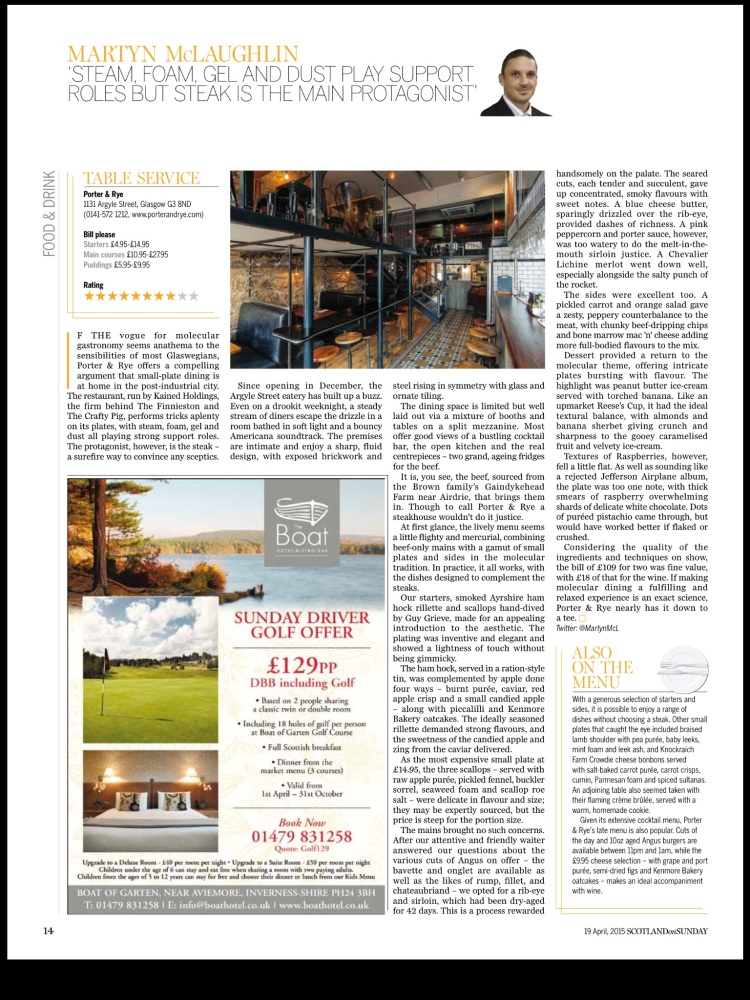 The ham hock, served in a ration-style tin, was complemented by apple done four ways – burnt purée, caviar, red apple crisp and a small candied apple – along with piccalilli and Kenmore Bakery oatcakes. The ideally seasoned rillette demanded strong flavours, and the sweetness of the candied apple and zing from the caviar delivered.

As the most expensive small plate at £14.95, the three scallops – served with raw apple purée, pickled fennel, buckler sorrel, seaweed foam and scallop roe salt – were delicate in flavour and size; they may be expertly sourced, but the price is steep for the portion size.

The mains brought no such concerns. After our attentive and friendly waiter answered our questions about the various cuts of Angus on offer – the bavette and onglet are available as well as the likes of rump, fillet, and chateaubriand – we opted for a rib-eye and sirloin, which had been dry-aged for 42 days. This is a process rewarded handsomely on the palate.

The seared cuts, each tender and succulent, gave up concentrated, smoky flavours with sweet notes. A blue cheese butter, sparingly drizzled over the rib-eye, provided dashes of richness. A pink peppercorn and porter sauce, however, was too watery to do the melt-in-the-mouth sirloin justice. A Chevalier Lichine merlot went down well, especially alongside the salty punch of the rocket. The sides were excellent too. A pickled carrot and orange salad gave a zesty, peppery counterbalance to the meat, with chunky beef-dripping chips and bone marrow mac ’n’ cheese adding more full-bodied flavours to the mix.

Dessert provided a return to the molecular theme, offering intricate plates bursting with flavour. The highlight was peanut butter ice-cream served with torched banana. Like an upmarket Reese’s Cup, it had the ideal textural balance, with almonds and banana sherbet giving crunch and sharpness to the gooey caramelised fruit and velvety ice-cream.

Textures of Raspberries, however, fell a little flat. As well as sounding like a rejected Jefferson Airplane album, the plate was too one note, with thick smears of raspberry overwhelming shards of delicate white chocolate. Dots of puréed pistachio came through, but would have worked better if flaked or crushed.

Considering the quality of the ingredients and techniques on show, the bill of £109 for two was fine value, with £18 of that for the wine. If making molecular dining a fulfilling and relaxed experience is an exact science, Porter & Rye nearly has it down to a tee.