The Demise of HMV

NEARLY 15 years ago, Q Magazine published an article speculating at how the rise of the internet might impact on the fortunes of traditional record shops. The text was accompanied by a mocked-up image showing the Tower Records store in Piccadilly, its doors and windows boarded up. It was a stark, sombre illustration designed as a wake-up call. Even so, I doubt anyone would have considered it prophetical.

Yet less than a generation later, here we are. Ownership of the symbolic retail address of 1 Piccadilly Circus has tumbled carelessly from Tower to Virgin before grinding to a halt under the Zavvi mast. Today, it is home to The Sting, a Dutch clothing firm. All three of those now deceased music stores will doubtless hold fond memories for many (personally, I would put Our Price on a loftier pedestal, in large part thanks to a furious summer of discounting in the mid 1990s which allowed me to purchase Black Sabbath’s back catalogue at a fraction of its true value) but none compare to HMV in terms of its historic iconography. 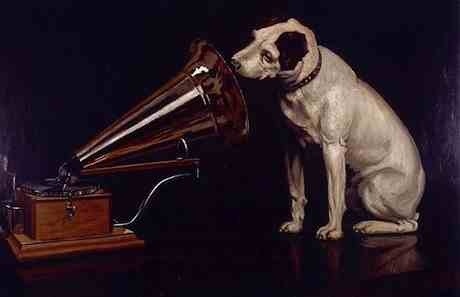 This is a company whose first store was opened by none other than Sir Edward Elgar back in 1921 – just in time to ride the wave of Cliff Richard’s debut long player. It was also HMV which led to Sir George Martin discovering The Beatles after Brian Epstein used its Oxford Street in-store studio to transfer the group’s infamous 15-track demo to disc, during which an impressed engineer had a quiet word with the producer and Parlophone executive. It seems a trite, nostalgic statement to make in light of its demise, but HMV has made a far greater contribution to British music than its retailer role suggests.

Back in 1998, when that Q article came out, HMV launched the first incarnation of its website, a cursory affair which seemed like an afterthought from a boardroom consumed by hubris and scornful of the need for change. The dipping of the toe into the digital pool appeared to be a means of expanding the customer base by a few percentage points, and nothing more. In an interview that spring, Gennaro Costaldo, a spokesman for the company, reasoned: “Our store is more like a lifestyle experience. You can’t compensate for a stimulating atmosphere. At the end of the day, the challenge is to get a balance. We can be optimistic about the future of the high street so long as our stores reflect what that future entails.”

“While I and many others yearn for the fetishistic joy of browsing in record shops, the truth is that no such experience could be had in HMV in recent years”

It was a half-hearted and ill-conceived policy which would have faltered regardless of the considerable challenges the recession posed the retail sector. While I and many others yearn for the fetishistic joy of browsing in record shops, the truth is that no such experience could be had in HMV in recent years. Of late, its branches have been sorry, confused examples of a retailer which knows neither what it is selling, nor to whom.

I stopped by its Argyle Street branch before Christmas, only to be meet with an eerie, Omega Man-style silence. Whereas once, the stores offered well-stocked racks of specialist genres, they had been been replaced by tawdry, poorly built speaker docks, enough Family Guy t-shirts to clothe Africa, and most curious of all, confectionery. The downsized music selection was, meanwhile, vastly overpriced. If that is a lifestyle experience, then I’ll seek my thrills filling out a Halifax secure confirmation form on the website of a Jersey-based e-retailer.

At various points down the years, HMV and its ilk have stood accused of trampling over independent retailers and sucking the oxygen from traditional shops. Now, it is being mourned as the latest victim of a high street where the only survivors are pound shops, fast food outlets of dubious hygiene, and overstocked warrens peddling third-party mobile phone chargers. The way things are going, It will not be long before one of them takes over stewardship of 1 Piccadilly Circus.

Senior reporter at The Scotsman and Scotland on Sunday. Views here, however, are personal.
View all posts by martynmcl »
« Speaking Out
The Price of Success »