At the SNP conference, from The Scotsman.

IT was a threat, wrapped in a question, inside a challenge. Robbie heroically drained his seventh pint of Cairngorm Brewery’s bitterest. Pivoting on his barstool, he turned to face The Suit, who, nursing a Highland Spring, heaped scorn on public procurement policies. He’d been at it for the best part of a quarter hour. No way, Robbie figured, would his drink be soured any longer.

“Excuse me,” he interrupted, a slight slur evident, “are you wan o’ they New Nationalists that’s up gate crashing oor event?” The Suit, oilier than a tin of sardines, managed a lopsided grin, and shuffled his party a few paces down the bar towards a grinning Stefan Tymkewycz, the Edinburgh councillor and former MSP. Peace at last.

“Where were they kind o’ folk 20 years ago when I was gettin’ chased by dugs doin’ canvassing?” Robbie grumbled later in the evening. He considers himself a “pure Scottish Nationalist first, and a socialist second” and finds little enthusiasm for the courting of big business or talk of taxation policy. “Independence, son, that’s what I want.” Well, that and an eighth pint of Stag.

Such mottled scepticism was the closest thing to disharmony at Aviemore over the weekend. No place here for the wild-eyed, anoraked soothsayers of Alba, or historical enmities. Instead, an SNP national conference of unprecedented scale and significance drew parallels with 1997 vintage Labour. In fact, more than a few in attendance had crossed the party line to the Nats over the past decade. Professionalism, that was the buzzword. As one minister confided, Aviemore was “all about showing this is a conference of Scotland’s government, not just the SNP”.

Though more than five months have passed, some still seem shocked by that fact. The infrequent delegate could be found wandering around the sprawling Macdonald Aviemore Highland Resort wearing the expression of a recently freed prisoner: a mix of euphoria, shock, fear, and the unknown. Perhaps the gravity and history of the occasion had just hit them; perhaps they’d seen John Swinney salsa dancing. 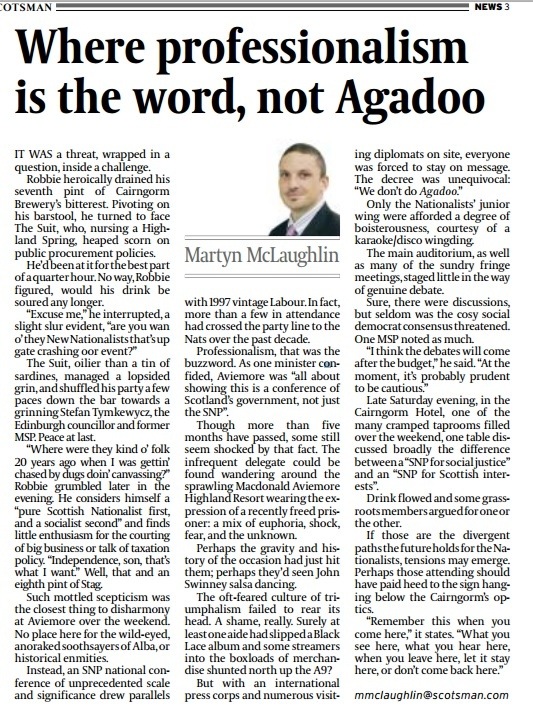 The oft-feared culture of triumphalism failed to rear its head. Surely at least one aide had slipped a Black Lace album and some streamers into the boxloads of merchandise shunted north up the A9? But with an international press corps and numerous visiting diplomats on site, everyone was forced to stay on message. The decree was unequivocal: “We don’t do Agadoo.” Only the Nationalists’ junior wing were afforded a degree of boisterousness, courtesy of a karaoke/disco wingding.

The main auditorium, as well as many of the sundry fringe meetings, staged little in the way of genuine debate. Sure, there were discussions, but seldom was the cosy social democrat consensus threatened. One MSP noted as much. “I think the debates will come after the budget,” he said. “At the moment, it’s probably prudent to be cautious.”

Late Saturday evening, in the Cairngorm Hotel, one of the many cramped taprooms filled over the weekend, one table discussed broadly the difference between a “SNP for social justice” and an “SNP for Scottish interests”. Drink flowed and some grassroots members argued for one or the other.

If those are the divergent paths the future holds for the Nationalists, tensions may emerge. Perhaps those attending should have paid heed to the sign hanging below the Cairngorm’s optics. “Remember this when you come here,” it states. “What you see here, what you hear here, when you leave here, let it stay here, or don’t come back here.”